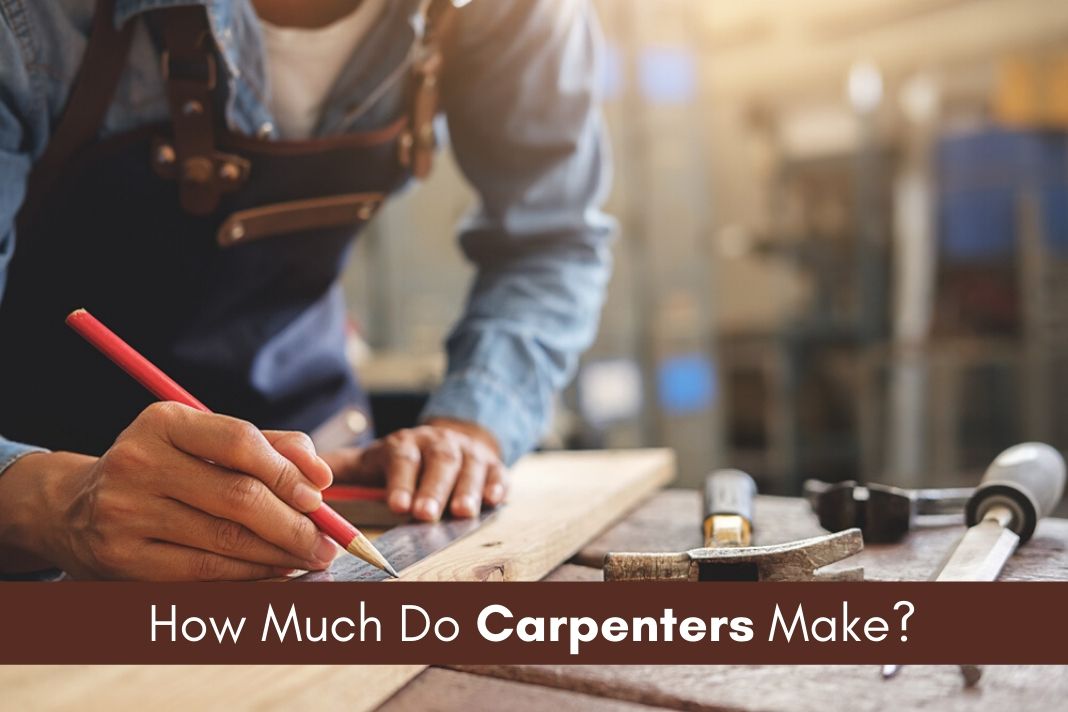 Carpenters specialize in repairing or building indoor and outdoor wood frames and structures. While you don’t necessarily need traditional education to become a carpenter, many complete a two-year technical degree program. Most of the learning experience comes through a hands-on apprenticeship, where they spend more than two thousand hours with a master carpenter in technical and on-the-job training. Carpenter pay varies based on location, experience, and employment type.

What Do Carpenters Do?

A carpenter makes wooden products that are often used to create structures, such as artwork, furniture, doors, foundations, and window framing. Most of the work is done individually, so it is vital to be able to adhere to deadlines. Attention to detail is necessary, as the end product needs to be safe and aesthetically pleasing.

To carry out the duties in this occupation, the ability to use power tools and hands, as well as excellent manual dexterity, is crucial. It is also necessary to have the ability to read blueprints. Proficient basic mathematical skills are required to carry out measurements. The job can be carried out in a shop environment that can be hot, noisy,  and uncomfortable, so it is necessary to be tolerant of these conditions. Physical strength is required to be able to walk and stand long periods, stoop and bend, and carry heavy items.

How Much Do Carpenter Make

The U.S. BLS reports that the average pay of all carpenters as of May 2019 was  $48,330 a year, or $23.24 hourly. At the high end, the top ten percent of carpenters earned $34.90 per hour or more. The lowest ten percent of income earners earned $11.96 or less per hour. The median pay was $19.20 an hour. The BLS also observed that apprenticeship pay is often thirty percent to fifty percent less than full professional carpenter salary.

Carpenters who make sets for the motion picture industry made the highest average salary at $33.23 per hour as of May 2012. Only 1,420 people were employed in this industry; however, which was less than one percent of the total number of carpenters working in the U.S., The comparative scarcity of jobs is typical of the high-paying sectors. Hospitals, performing arts companies, and sporting arenas are other high-payings for carpenters with average compensation ranging from $27 to $29 per hour. All of these industries employ less than 1,000 workers. The industry with the highest carpenters, residential building construction, paid an average of $20.25 an hour. Non-residential building construction paid an average of $23.05 per hour.

Income for carpenters varies by state as well because of the differences in supply and demand of workers and the costs of living. In Hawaii, a little more than 4,000 carpenters made an average hourly pay of $32.20 as of May 2012, making it the top-paying state. Alaska employed only over 3,000 workers who made an average income of $29.98 an hour. Massachusetts, New York, and California all had significantly more carpenters, but the employment rate was lower than that in either Alaska or Hawaii. Income for all three of those states was right around $27 per hour.

Self-employed carpenters can choose which kinds of projects they want to work on. Remuneration depends on the level of competition in your region and your work assignments. The BLS reports that thirty-nine percent of carpenters were self-employed in 2010. Carpenters who belong to unions stand a chance to make more than average because unions can negotiate favorable prices. Approximately sixteen percent of carpenters were union members as of 2010, the BLS reports.

[ Read: How to Be a Freelance Carpenter ]