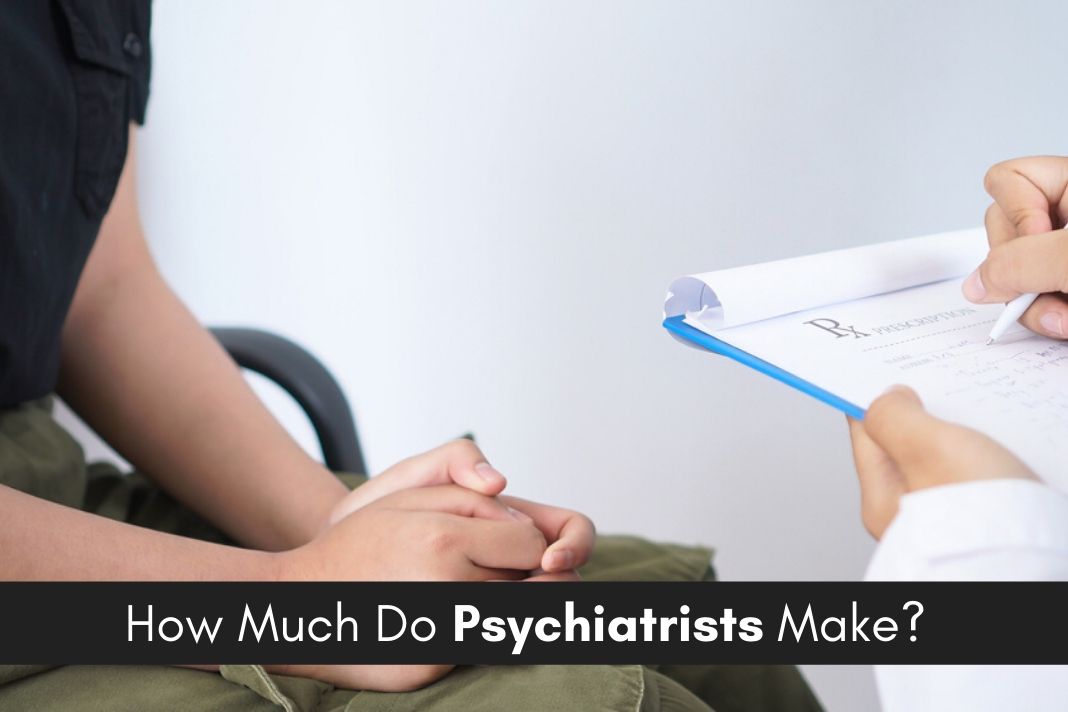 Because psychiatrists are medical physicians, they can use medication, therapy, and hospitalization to treat emotional, mental, or behavioral disorders. This makes them stand apart from psychologists, who can only use therapy as part of their treatment procedures. The benefits and salaries of psychiatrists differ by employer and location of the job.

What is a Psychiatrist?

A psychiatrist is a medical doctor with experience and extensive knowledge in the mental health field. In the overall job description, treating and assessing patients who struggle with mental health disorders is the dominant role. Psychiatrists use various tools to find solutions for their patients, including psychoanalysis, psychotherapy, medication, and sometimes hospitalization.

How Much Do Psychiatrists Make

Psychiatrists earn an average of $220,430 per year or $105.98 per hour states the U.S. BLS. The lowest-earning received less than $71,590 annually or $34.51 hourly. ONET OnLine estimates psychiatrist jobs increasing by ten percent to fourteen percent. This is in line with the Bureau of Labor Statistics prediction of thirteen percent growth for all surgeons and physicians, and faster than the seven percent expected for all workers in all U.S. jobs. The trigger for this growth will be a burgeoning and aging population.

The largest employers of psychiatrists, according to the BLS, are the offices of doctors, which include those experts who are self-employed. With 8,670 out of the total 25,260 psychiatrist positions, this employment category shows average pay at $222,560 per year or $106.96 per hour. Substance abuse and Psychiatric hospitals are next for positions with 3,790 professionals making a mean annual salary of $205,300, or $98.66 per hour. The highest paying employer is a state government, showing average salaries of $254,270 per year, or $122.30 per hour. Home health care services are next, with a mean salary of $234,790 yearly, or $112.83 hourly.

Pay Based on Location

The state with the highest jobs for psychiatrists is New York, with 3,700 jobs and mean wages of $201,230, or $96.75 per hour. Not surprisingly, New York City has the most significant employment of psychiatrists with 2,890 positions, making an average annual compensation of $206,980 or $99.52 an hour. The Los Angeles area and then Chicago is next after New York City.

For highest pay, California tops the state list with a mean income of $259,670 per year, or $124.99 per hour. Among metropolitan areas, New Jersey, Trenton tops the list, followed by the Tacoma, Washington area, and the Stockton area (Central Valley of California).

[Read: How to Become a Freelance Psychiatrist]

Psychiatrists experience more definite benefits that depend on their employment, aside from the satisfaction in helping patients to cope with emotional and mental issues. Those who are self-employed can choose the most compelling cases, set their own schedules, and set their remuneration. Those working for an organization receive the same benefits to which all employees of that enterprise are entitled. For instance, at the UCSF (University of California-San Francisco), residents in the Department of Psychiatry receive health insurance for dental, medical, vision, disability and life; vacation, malpractice coverage; holidays and sick leave; day-and-a-half offsite retreat and a contributory retirement plan.

[ Read: What It Takes to Become a Psychiatrist – Find out the Steps ]

Psychiatrists have excellent job prospects. The U.S. BLS predicts that employment for psychiatrists is expected to grow by sixteen percent, which is quicker than the average for all occupations. Growth is expected to be slightly slower than it will be for other specialties like internal medicine, anesthesiology, general practice, and family.