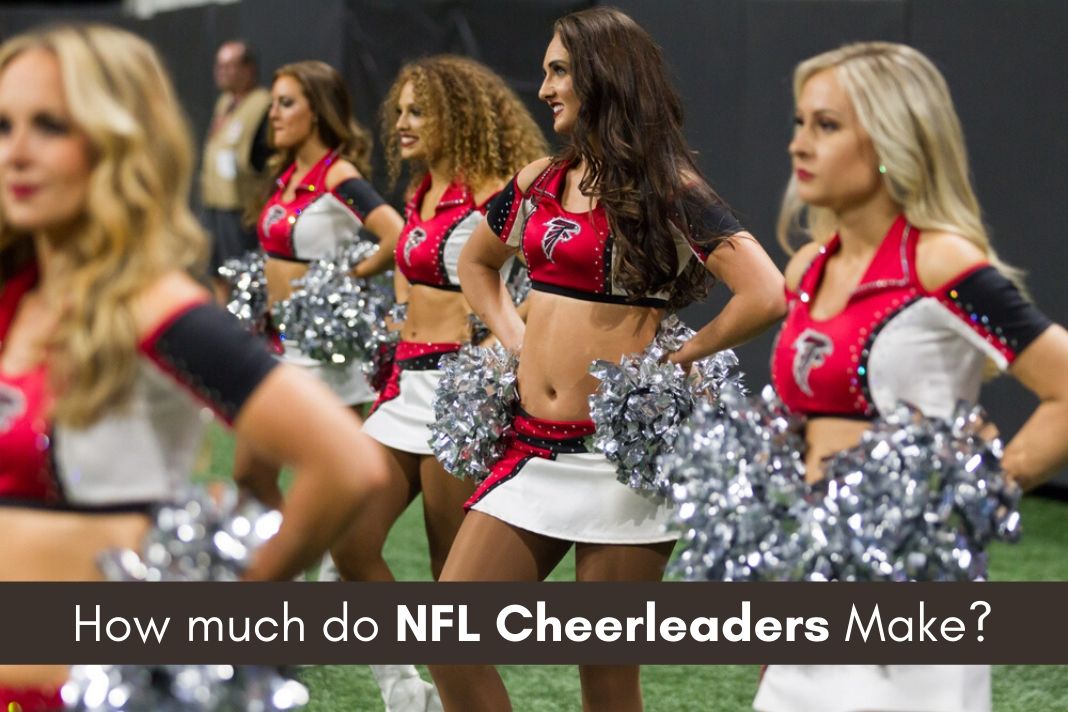 By outward glances, professional sports cheerleaders have a great profession. They get to meet famous players, attend sporting events, and dance or cheer in front of a noisy crowd. The reality is somewhat different: Cheerleading is physically demanding and hard work. Moreover, cheerleaders have to follow strict rules regarding appearance and behaviour and adhere to appropriate conduct guidelines. The average NFL cheerleader’s salary is notoriously low, and most professional cheerleaders do a side job to make ends meet.

Though being a National Football League cheerleader is a part-time profession, cheerleaders can expect to spend about 8 hours rehearsing every week during the NFL season(1), plus eight hours for cheering at every home game. Cheerleaders also attend charity events and public appearances on behalf of their team and squad. Other duties can include attending corporate events, and community outreach occasions. Cheerleaders also take part in autograph signings and photoshoots.

Different teams have different prerequisites, but all teams expect cheerleaders to appear and act in a manner befitting the sports franchise. There are guidelines regarding dressing appropriately and associating with the players, as well as what a cheerleader can’t and can do in public. NFL cheerleaders are expected to adhere to physical standards, with guidelines for appearance and weight. Even though they are expected to look attractive, makeup, clothing, and audition fees are an out-of-pocket expense not covered in the NFL cheerleader remuneration.

Requirements for Being a Cheerleader on an NFL Squad

Surprisingly, there is not a fixed set of requirements to be a National Football League cheerleader. Cheerleaders are hired based on their persona when entertaining. A few teams have cheerleaders who sing and act in addition to dancing, and these cheerleaders go around to various venues and perform. Prior dance experience is not mandatory, and there is no age requirement and weight or height requirement for most squads.

[ Read: How to Become a Successful Esports Player? ]

How much do NFL cheerleaders make

Being a professional sports cheerleader isn’t a job for anyone expecting high remuneration. Pay differs, depending on the franchise, and an Eagles cheerleader salary can vary from, say, a Dallas Cowboys cheerleader’s salary.

The different sports franchises are vague about what they pay their cheerleaders. League averages are between $75 and $100 per game, with a $50 fee for other public appearances. Whether or not cheerleaders earn wages for training and rehearsals depends on the franchise.

Though the wages vary depending on the franchise, most NFL cheerleaders can earn at least minimum wage. The average NFL cheerleader salary ranges between $10 and $16 per hour for rehearsals, adding up to approximately $3,100 to $3,500 each season. Being part of a great team doesn’t necessarily garner a rate of pay, either. Though the franchise is tight-lipped about earnings, the average Dallas Cowboys cheerleader’s salary is rumoured to be about $150 per game.

The National Football League yearly schedule consists of 8 regular-season home games. Many cheerleaders who sign an annual contract earn about $550 to $760 per season, depending on which squad they cheer for and whether that team plays any additional home games in the playoffs. Okay, that’s not fair, Brees is the highest-paid player in recent times.

Some more perspective: NFL mascots are paid between $23,500 and $65,500 per year, and that’s excluding benefits or yearly bonuses (which can be considerable if a team wins the Super Bowl). Cheerleaders see nowhere near to this amount of pay, and in most cases have to dress up in even crazier outfits.

There are a total of two ways NFL Cheerleaders salaries payout are conducted. The Per Match Basis salary which includes per Matches Payment and the Annual Payout which they get an annual payment in advance as per the wage contract they sign. However, if you think these pretty ladies are getting well paid, then the reason is their hard work and resilience.