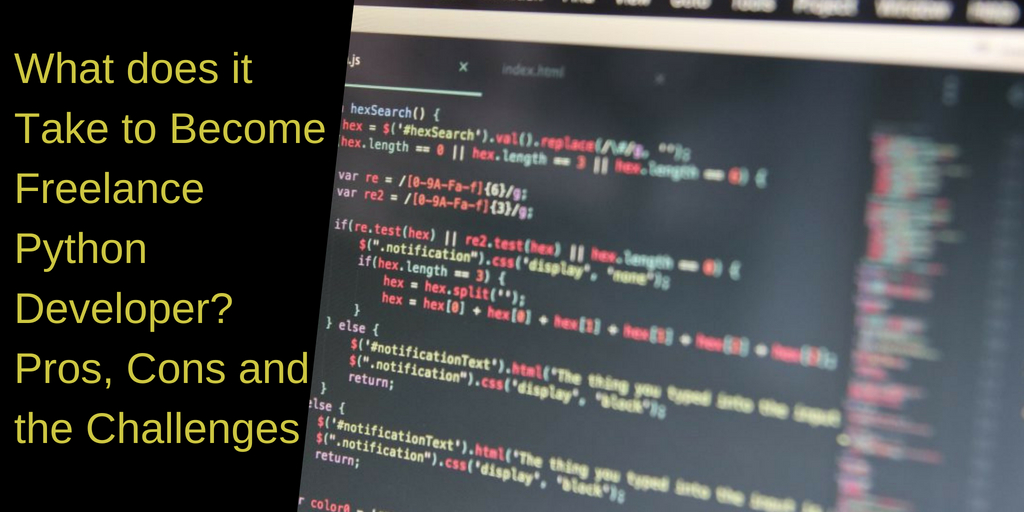 Freelance Programming is a mind boggling career. It gives you a lot of money, freedom and job flexibility. Freelancers are getting popular because of this factor alone. Developing software does not require working in an office, full time. And moreover, when you can work with two or more companies simultaneously and earn more than what a full time developer with same work experience earns, then why not?

If freelance programming career inspires you, you can be a Python Developer. Careerlancer has come across and worked with many Python programmers and so it was very easy for us to sum up the pros, cons and challenges of this field. Take a look at this before you delve in to becoming one.

Since we also look out for our beginner buddies as well, we have tried to cover the basics of Python knowledge…if you are an expert you must already know these.

Python is one of the trending and most demanding programming languages among the developers. It is object-oriented, interpreted and high-level performing language.

The programming language is mainly used for web and web app development. It is used for Rapid Application Development as well as used as a scripting language that connects existing elements together. The syntax of Python is easy to learn and read which furthermore reduces program maintenance cost.

Programmers often love python because it increases productivity and work efficiency. Debugging Python is also very easy and uncomplicated. The programs not only can be designed in modular style but even the codes of Python can be reused across a variety of projects. This is due to the Python’s ability to support the use of modules and packages.

One of the biggest benefits of Python is thatboth its standard library and interpreter are available to coders free of cost. This basically means Python can be used to develop virtually anything.

We have collected the information by talking to freelance Python developers we have known.

One of the best parts of freelancing Python is also the biggest truth of python programming itself: Python codes are simple, neat and clean. This basically means you don’t have to brainstorm for hours or days together in figuring out what the previous developer did or thought when he was writing a particular function or class.

Today, almost all Python developers follow PEP 8 which makes deciphering Python codes for freelancers quite easy, where technical support is not needed.

Python developers are also dedicated to writing great doc strings and Sphinx based documentation. Additionally, all Python developers are great test writers too; so the projects you come across will already have decent test suits. Refactoring and adding new elements with existing test suits will be a lot easier for you.

However, if you are allocated a project without any test, you get a break-through opportunity to show your skills. By creating your own tests for projects, you will only make it stronger, while you will get to learn about the codes simultaneously.

Okay, what we are going to say is the story of every freelancing career. You will be occasionally be hauled with deadlines that are too short, clients that don’t pay for invoices even after repeated calls and those other type of clients who are totally clueless as what they want or what they don’t out of a project (such clients are totally annoying, seriously. It becomes very hard to satisfy them).

Freelance Python developers will also face similar problems. You will meet clients who have unrealistic expectations, such as super experienced developers with super-powers to handle any problem that comes their way, who have the capability to do everything, from HTML writing and JavaScripts creation to writing Python and also setting up the network servers that the programs eventually run on.

Now that’s too much for a freelancer, isn’t it?

If it was a development company, you would have worked with numerous other support staffs, but here you have to tackle everything.  Oh, there’s more to it. Sometimes you have to deal with legacy codes too (top of all the listed skills and experience needed).

Legacy codes are codes that have been written years back (probably when Python had started 28 years ago) and are not upto today’s technical standards. Now this code poses as a complete new threat – you cannot refactor it easily as most other old codes will be dependent on it.

So, it basically means you have to remember and document classes of the old code and know why it acts in a special way. In such cases docs and test suits work as a commendable support, if they are available.

The ugliest part of being a freelancer Python developer is not getting your payments on time. To deal with client’s ugliness, we highly suggest you to ask a token advance for the development work. And, you have to be prepared to meet so many of them.

Apart from such horrifying clients, in worst case scenarios, you will also encounter codes that are untested, undocumented and written by technical story-writers instead of Python developers. These APIs will come to you every now and then and so, you have to create a pattern to remember how each code with specific issue works.

Although, Python is a demanding field, getting into a freelance career and then getting yourself recognised among so many other qualified developers could be quite frustrating, at least in the beginning.

5 years back number of full time employees as opposed to freelancers was more in comparison to the number of jobs. But thanks to 2016-2018 growth in freelancers’ popularity, both talent and demand is equally soaring.

If you want to be equally competitive and rise above other full –timers, you have to ensure that you have those extra skills, know the ins and outs of DNS, know how to set up a server or database and get accustomed to statistical computing and natural coding language. Only then you can set yourself apart and add more clients easily.