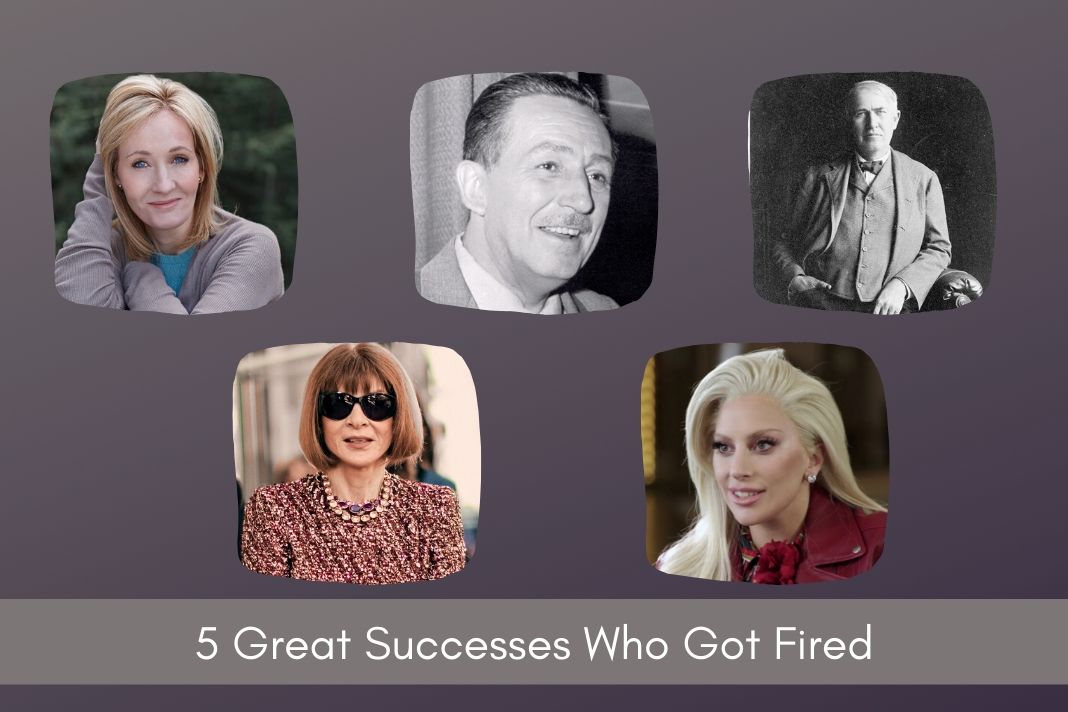 Getting fired may be the worst thing that can happen to a person apart from being dumped, but hey, you’re still alive, and as long as you’re alive, your life is in your hands. It’s not the best thing to be laid off generally but especially so during these trying times where workers, under the guise of ‘non-essential workers,’ are being sacked left and right without any proper notice. Businesses are being shut, and roads are being closed down with no proper prospects of future.

Here are some people who got fired, and after they hit the lowest point in their lives, they turned their hardships and immersed themselves into something they were actually passionate about.

We all know the world-famous fantasy author whose books have been translated into multiple languages and got adapted onto the silver screen as multi-billion-dollar movies. She was first working as a secretary for the London office of Amnesty International, and 90% of the office time was spent on writing fiction and dreaming up Harry Potter – Which, incidentally, was the reason she got fired. Oh, how fate laughs!

JK Rowling used her severance check to survive as a single parent and jobless without being actually homeless in Britain. At the time, she was diagnosed with clinical depression and contemplated suicide as well. This episode inspired the soul-sucking character in the third book known as the Dementors. Several publishing houses rejected her until she almost gave up when finally Bloomsbury publishing house in London gave her the green light with an allowance of 1500 pounds.

However, she lost her billionaire status after contributing to several charities but is still considered as one of the wealthiest people in the world. As of April 2020, the net worth of JK Rowling is estimated to be $1.5 billion. More than 450 million copies of The Harry Potter series of books have so far been sold and generated around $7.7 billion in revenue for her.

The inventor of the incandescent light bulb, Thomas Alva Edison, started venturing into business at the young age of 13 years old, distributing newspapers in the streets. At the age of 19, he was employed in Western Union in the night shift. He used to comment that his first love was reading and experimenting, which the night shift allowed him to pursue during the day.

On one such night, in the year 1867, he was tinkering with the lead-acid battery and dropped a vat of Sulphuric acid on the floor, which not only ate through the entire floorboard but also dripped on his bosses’ desk on the floor below due to which he was fired.

Later, in the year 1869, Thomas Edison and his friend started their own company near New York and started developing various multiplex telegraphic machines. In his lifetime, Thomas Alva Edison patented around 2400 utilities, including batteries of various kinds, cement, electric lightbulb, telegraph, and phonograph.

These inventions eventually led him to found 14 companies, including General Electric, which is one of the largest publicly-traded companies in the world. By the time he died, in the year 1931, his net worth was estimated to be 12 million dollars, which, when adjusted to inflation, will match up to just about 200 million dollars as of today.

The editor-in-chief of Vogue, made famous by her iconic bob cut and large shades, Anna Wintour, was first introduced to the fashion industry by her father. He arranged her first job at the influential Biba Boutique in London in the year 1964, at the age of 15 years. In 1970, she was hired as one of the first editorial assistants in Harper’s Bazaar UK magazine and set out to shoot in trendy locations all over London.

Due to many disagreements with her co-workers, she quit the Harper’s Bazaar UK and moved to New York. In 1975, she was hired as the junior fashion editor at Harper’s Bazaar New York. Many trendy, innovative, and seemingly far-fetched ideas, and nine months later, the editor fired her because he found them too extreme to implement.

Anna Wintour later joined Viva magazine as an editor, where she could hire an assistant, which gave her the ‘demanding and difficult boss’ tag. In 1978, the magazine shut down, and Anna decided to take a break from work. Two years later, she became the fashion editor for Savvy, followed by the New York magazine, and finally, in 1985, the first editorship for Vogue UK. Two years later, she became Anna Wintour, Vogue editor-in-chief, and the chairwoman for the Met Gala.

Stefani Joanne Angelina Germanotta, or famously known as Lady Gaga, was born and brought up in a conservative Christian family and had piano and music lessons from when she was four. In 2003, she gained admission into the Collaborative Arts Project 21, a music school in the New York University, where she improved her music and songwriting skills.

Lady Gaga quit the course during the fourth semester to pursue her music career. Three years later, her then-boyfriend, a music producer, and she teamed up and created a company called Team Lovechild LLC. They recorded various pop tracks and sent them out to music industry executives.

One such person at Def Jam Recordings was impressed and signed Lady Gaga on in September 2006. Three months later, however, she was dropped, and lady Gaga went home for Christmas. Two years later, she released The Fame album™, which topped the charts all over the world. Currently, her net worth, including album sales, tours, movies, and the make-up company, is about 275 million dollars.

[Also Read: What Should You Do When Your Job is at Risk?]

All the Disneylands, Disney worlds, the animated films, and live-action films wouldn’t have existed if not for the editor of the Missouri newspaper, who fired Walt Disney, in the year 1922, for “not being creative enough” as the resident cartoonist.

Walter Elias Disney had won 22 Oscars from 59 nominations, several Academy awards including Golden Globes and Emmy awards during his lifetime. He gained a net worth of 150 million dollars by the time of his death in 1966. When adjusted to inflation, this is nearly a billion dollars today. This includes producing, screenwriting, directing, voice acting, animation, entrepreneurship, and a world-renowned entertainment park.(1)

Let all these successes, the stories, and the struggles in their early life become an inspiration to all the artists and young entrepreneurs out in the world. This should teach you that being fired is not the end of the world because the world has so much more to offer. Remember, they say that as one door closes, a window will open.