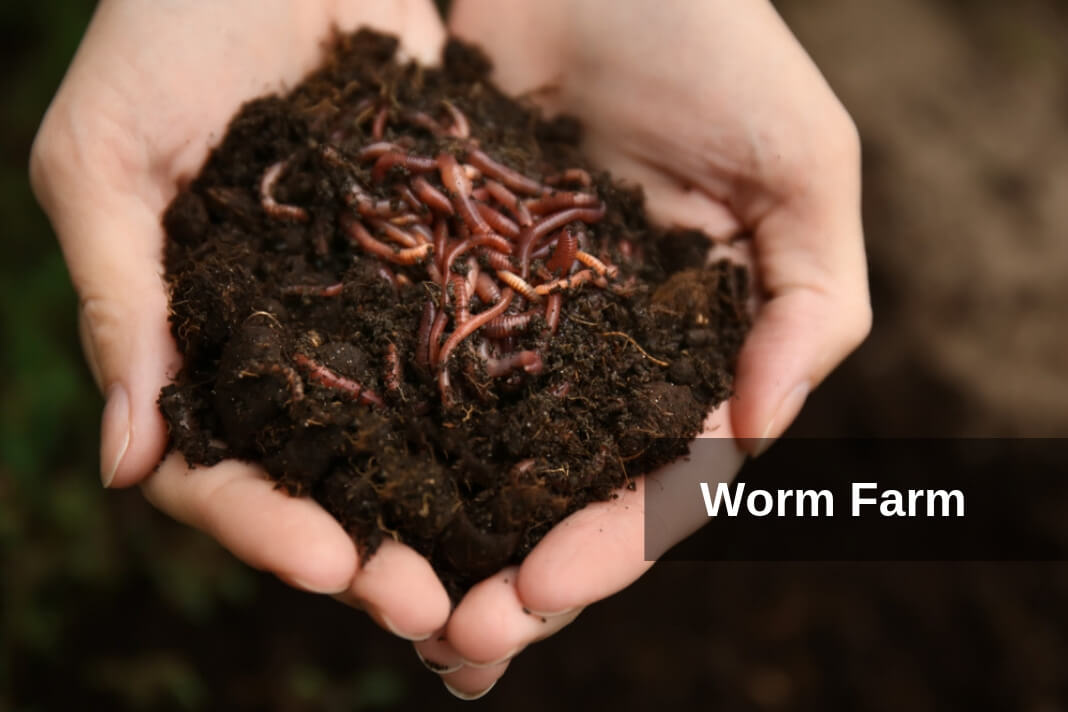 Worm farming is very basic. But the long-term benefits it offers in cultivation are undeniable and unfathomable. Worm farming is also known as worm composting, and it is also occasionally referred to as the Black Gold of soil. Worm farming improves the structure of soil, enhances the taste of fruits and vegetables, boosts their growth, increases yield, and makes crop long-lasting in the field. So, is it not worth calling Gold even if black? Worm farming is easy and a hundred percent organic. It does not require any chemical processing or industrial treatment.

The method is being followed for hundreds of years now. And it is totally traditionally done. If you have a farm, the best you can do is build a worm farm alongside and earn a super profit. You do not need to be a handyman or rather, you don’t need handyman to do this work for you. You just need some manure from an organic dairy and you are good to start a process.

If you are interested to build a worm farm, let us guide you with the process steps.

Vermiculture or Worm Farming is an age-old process of composting using worms. Even though all organic materials go through the process of decomposition, vermiculture accelerates the process significantly. What happens is the worms, the thousands of red wiggly creepers, consume the decaying organic materials and expel it out what is called as ‘worm manure’ or ‘castings’. The manure is full of nutrients. Worms make normal compost rich and fully effective. One can own and grow different types of worms for worm farming to accelerate compost.

In short, the worms create compost that acts as a natural fertilizer and conditions the soil superbly.

Compost produced by worm farming has no smells and they contain beneficial microbes. Vermiculture can be used in both the flowering and plant vegetative stages.

How Does It Work?

During worm farming, you will be required to harvest the castings only when they appear earthy-brown in color. The casting could be mixed directly into the soil around the plant or liquefied by brewing the manure with water. This is often referred to as ‘compost tea’.

You can build a worm farm in a tiny urban bin or on a large farm. The choice is ultimately yours. However, we suggest that you start small, so you know the pattern, the process, the pros, and the cons. Some folks produce chambers of compost with the help of around 12 million working worms. Some even harvest worms for sale. Now that is another process for another day to share, as that requires many steps, including buying a worm separator. These worms are cleaned and sold to customers who are planning to start their own small vermiculture.

It is a very interesting, fruitful, and lucrative business. The only thing that you need inadequacy is patience. You also should not feel nauseated by the site of lacs of worms slithering around you, on your hands and in-between your fingers. If you are a gardener and have a cute home garden, you can grow your own worm compost inside your apartment or in your backyard.

The Traditional Method Of Vermiculture

A traditional worm farm consists of a single compost bin, usually made from a wooden crate or a brick. Concrete and steel troughs are also used. The bin would have tiny slots at the bottom to encourage drainage. Some may even have perforated base. A thin layer of sand or gravel is placed to cover the holes in the bottom. Then bedding of rotten manure or old compost is layered. The compost is usually mixed with wood shavings or bits of newspaper and cardboard. Water is sprinkled to produce dampness. Then the worms are added and again, the entire farm of worms is covered with a wet burlap cloth to protect them from insects and keep the temperature under control.

Today farmers try to reduce the space of worm farming by creating a slim and stackable composting system. The urban bins are best for amateurs and home growing worm farmers. The bins can be easily stacked upon one another making the place look clean. In stackable bin worm farming, red worms are used instead of drab earthworms. While earthworms are friendly and helpful, they tend to dig deep. On the other hand, the cooperative red compost worms migrate upward towards the food, leaving their castings below. The multiple-stacking system allows the bins to nest one within the other. The worm castings are collected in the lower bin, while the food is provided and consumed on the upper-level bin. When the lower bin is filled with casting, it is removed, emptied, and rotated to the top.

Instead of bins, you can also use stacked tires to cultivate your worm farm. It is a low technology and affordable solution to worm farming, which allows you to reuse old tires wasting in your garage. This could be an extremely good source of income for low-income communities and an excellent addition to school projects.

The number of bins you want totally depends upon your operational scale. If it’s for a home garden, you won’t require more than 2 – 3 bins. You need bins that are not vertical from the sides but tapered to help stack bins above one another. The tapered style allows for partial nesting of bins. You would also require a suitable lid for the bin to prevent insects and birds from attacking the worms. Make sure your bins are opaque – probably has a darker shade. Worms do not like the light at all. Three ten gallons or 45 – 50-liter bins would do for your small garden composting. You may want to change the size as and when you grow. In fact, you can stack more bins one above the other just as easily.

The best types of worms for worm farming are the red worms (Lumbricus Rubellus) and red wigglers (Eisenia Fetida). For urban composting bins, these two worms are ideal because they are easy to grow and their growth is conditioned to a compost environment than plain soil. Moreover, they can be easily separated from the casting- bins as they are always busy eating, away from their castings. Since these worms feed on vegetable waste and organic compost, they produce richer fertilizer than those worms that feed on plain soil.

You can order the worms over the internet or buy them from a local supplier. You will probably need around 1000 worms to start vermiculture. Do not try to find the worms by yourself. Although worms can be easily located near rotting compost, under rotting logs, and in any other organic environment, it is difficult to differentiate from a Lumbricus Rubellus to another worm.

We will tell you here how to prepare and set up a three-bin composting system.

The upper two bins will be the Composting Bins. They are prepared identically.

After you have prepared the bins, it is time to set them up for the army to work. Follow the steps one after the other until the end to make the system perfect.

Step 5: Setting Up For Composting

Your first bin will be the home of the worms. You need to make perfect fibrous bedding for the worms to nest.

Coconut choirs, shredded newspaper, or old cardboards are perfect materials for the bed. Make sure you wet the bedding properly. Worms like to thrive in the damp and mushy environment. So providing such an atmosphere is a must.

Place compost on the bedding, and then place the worms along with a handful of damp soil inside the bin. Once this is done, put some kitchen scraps inside for feeding the worms. You can cover the food with sackcloth and close the bin with the lid.

That is all you have to do to start production. Within a day or two, after the worms have accustomed to the surroundings, you will be ready to start the culturing.

Remember these points to produce richer and more castings for your compost:

Worm farming is not only cheap but also extremely useful. We definitely suggest that you try this at your home. For more information, please leave your questions and doubts in the comments below.