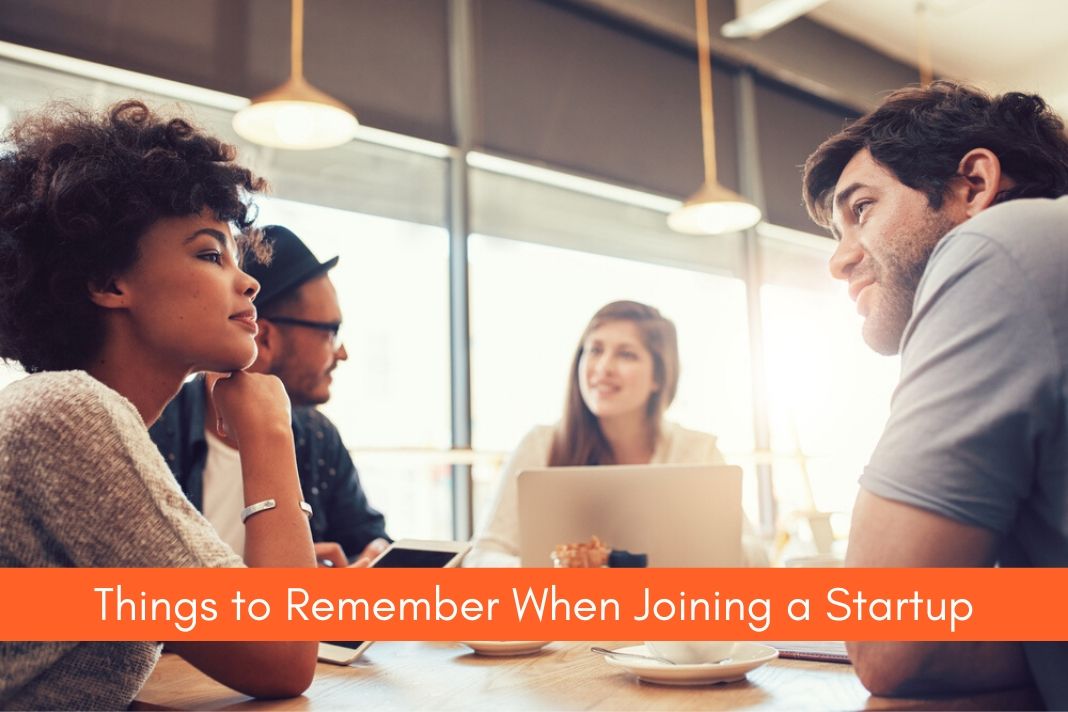 Working with startups can be exciting, rewarding, and stressful in equal measures. There are so many things to consider when you’re joining a startup. More than that, joining a startup(1) is a commitment because, unless you find a boss who’s willing to accommodate you, you may have to compromise on those family commitments and personal moments.

In a startup, you have to push yourself even harder because the product isn’t commercially ready, or the strategies aren’t in place

In a startup, whether you’re an early employee or you joined after the company received its first round of funding, it’s a 50-50 chance that you’ll make it to the top. For everyone well-versed with probability, those chances aren’t the real ones. We are speaking metaphorically because a lot of startups fail within the first 5 years. If yours takes off, then that’s amazing because you’re part of a journey rather than sitting at the destination

Whatever the stage of the startup you’re considering joining, there are some things you need to consider before joining one.

There is No Structure

The simplest way to sum this up is to say that startups are chaotic. If you’ve shifted from companies that have organized structures and protocols, it will be hard to get used to a startup environment. For people who have come from such companies, the idea of the freedom and chaos and that a startup offers can sound exciting.

But all of it comes at a cost. Whether you’re coming in as an entry-level employee or in leadership positions, you need to be able to embrace the chaos and create structures that would enable the processes to scale. At a junior level, you need to be able to trust that your leaders have a vision and a direction, and are providing you with goals that work within the established framework.

Either way, many times, you won’t know what you’re supposed to do. Startups require a lot of experimentation and figuring out what works. Structures and processes are established that way only.

There is No Culture

How would you define a ‘culture’ in a company? When you try to define that, what do you even mean by the word ‘culture’? A famous poet once said that a country is not its soil and earth, but the people that live there. By that logic, the culture of a company would be the people in it.

In a startup, there are very few people working. The founders themselves might have handpicked many of them.

However long these employees have been working here, they are the ones you have to work with. Working with these people means constantly revising and evolving your relationships with them. You slowly start to define what is allowed and what isn’t. When you have a group of people that would have formed a part of a department in a large organization as the entire workforce of a startup, defining culture becomes trickier

Even beyond those people, how are you willing to handle the interactions with those people? Are you patient enough to deal with various personalities and egos? Are you willing to check your own ego at the door and work for the common goal? The culture of a startup at an early stage is largely defined by the founders. If they are friends and have a ‘bro’ attitude, the entire firm will have a general ‘chilled bro’ vibe to it. Which brings us to the next point

Find Out About Your CEO

Before joining a startup, you have to ask what you really know about the CEO of the company. You have to do your own research. In the early stage, trusting your founders is important because you need to believe in the product and the brand. But that is not what we are looking at here. We want to understand that the CEO of the firm is like

If it is the CEO’s first foray into startups, then more likely than not, he’s on a learning curve. In that case, how willing is he to progress as an agent of change and a forward-thinker.

When that is the case, you need to look at the endorsements that he has received in his previous organizations. These endorsements should not be just from his peers but from his direct reports. Another way to assess this is to see what he does at a meeting. Does he talk about the vision of the firm and boosts his profile instead of actualizing it by a strategy? That would raise some red flags.

More importantly, do you trust the founders’ ability to represent the company? Is he a great leader? If not, is he smart enough to understand that he needs to hire people to fill that gap? Is he trigger-happy and willing to drop employees like birds, or is he the kind to take people up along with him? You should remember that your CEO is the face of the company and the person upon whose pitches the investors will rely on. Some CEOs will always be better than others at this.

You need to trust that your CEO will be able to manage the investment and spend it in the right way so that the right infrastructure is set up before any indulgences can be done.

If the CEO spends extravagantly even before the company enters the marketing stage, he has to enter the full pitch mode of the company dies. Whatever the spending pattern, the CEO better have a good revenue generating pattern.

When you are discussing with your CEO, it helps to ask a few questions like

Asking about their investors might not elicit an answer, especially if you’re joining at an entry-level. But if the company is acting shady or being overly secretive, then it might be cause for worry.