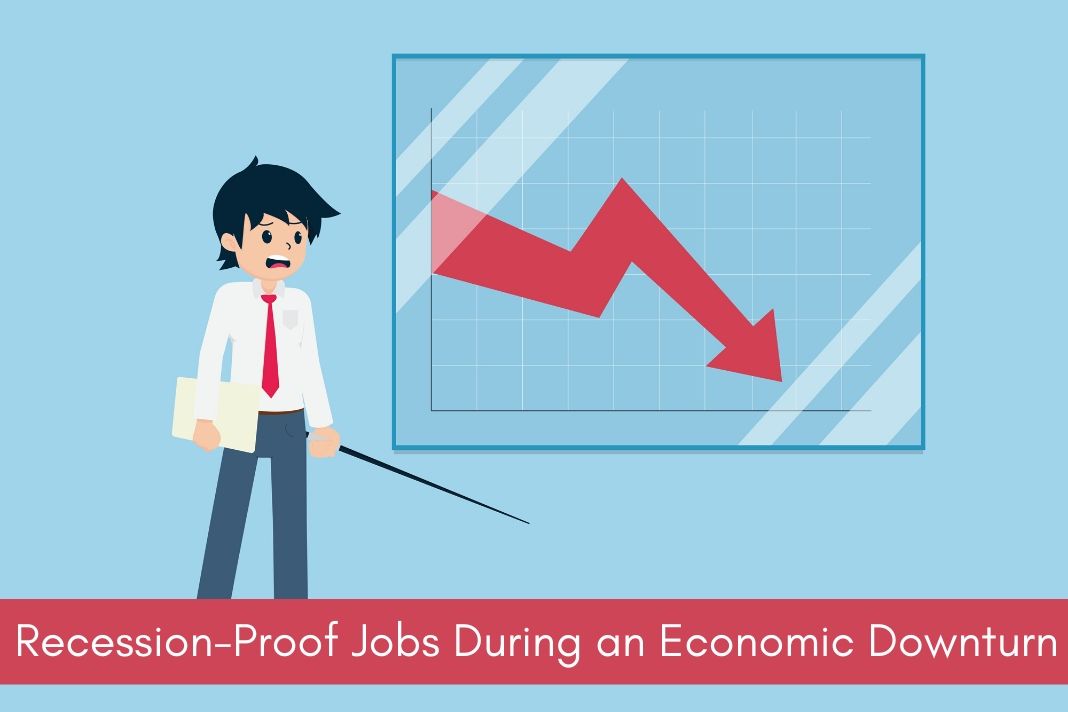 Economic recession is an unfortunate inevitability of a business life cycle. Some economic downturns are mellow, while others are heavy. Experts will always rationalize and point out that a certain event wasn’t a Black Swan event but a chain of structural weaknesses. The truth is, when you’re stuck in the storm, it doesn’t matter if you should’ve foreseen it or if your house wasn’t sturdy enough. All you can do at that time is stay put and weather it over.

Jobs during the recession are something like that too. It is a vicious cycle that we keep experiencing. In the economic crisis of 2008-09, US households had lost more than a quarter of their wealth, while publicly-traded companies lost over two-thirds of their total wealth. In times like those, companies look at cost-cutting, and the first cost that will be cut is employee cost. Jobs will be the first to go and then production. This a close-ended loop there’s no escape from.

This article starts off on a grim note. However, the job market isn’t that grim. There are five sectors that can’t be eliminated irrespective of the economic condition in a country. At best, the demand for those professions will be lower.

Otherwise, they’ll be the best equipped to weather the storm. They are the health industry, law enforcement, insurance industry, education industry, and IT industry. There will always be miscellaneous jobs that are strong enough to ride the tide, but these take the cake. So, let us look at some of the jobs in these sectors

These two terms – health workers and hospitals – is an umbrella term for nurses, doctors, surgeons, health workers, senior care providers, hospice workers, and veterinarians. Saying a recession wouldn’t impact these jobs entirely is an exaggeration to some extent. Jobs for every type of medical professional won’t be safe.

In a crisis, people are less likely to visit a cosmetic surgeon for a facelift or a tummy tuck. In the same way, people are unlikely to keep up with their dental appointments. Instead of going once every six months, they would go once a year for their check-up. Besides, most insurances providers don’t include dental check-ups in the plan

Therapists don’t just include psychologists. It also includes physical therapists. In many cases, for several individuals, therapy is an integral part of hospital treatment after surgery or a course of medication. Apart from that, the stress caused by the loss of a job or risk of livelihood creates several other problems.

In short, the economic crisis increases the need for a psychologist. The one area no matter what the economic condition is, that people won’t skimp on is health.

Most people will provide the elderly with some form of assisted living. Senior care providers will be needed more as a recession deepens. In the same way, in the early days of the recession, people will need hospice workers to make the dying comfortable before their death.

[Also Read: How To Make Your Career Recession Proof]

The recession has proven to have an increase in the crime rate. This is a consequence of the lower rations available with people and the desperation for getting a livelihood. The demand for law enforcement officers increases when the city authorities want to keep the crime rate in check.

Not only is it important for cities to keep their residents safe, but for them to keep a check on the crime rate statistics. So, every job from beat cops to CSI agents, there will always be a requirement for law enforcement officers. Besides, in times of recession, authorities give a lot of powers to the law enforcement officers which meant that they would have increased requirement in the economy

While in times of recession, people are less likely to maintain general insurance, they will maintain health insurance and life insurance. Besides, the rules in several countries require that automobiles maintain updated auto insurance. The insurance premium is determined by the inherent risk.

In turbulent times, insurance agents to assess risk accurately to prevent losses for the company. With the increase in demand for insurance and the competition inherent in the insurance market, there will be a requirement for a lot of people from actuaries for assessing the risk, insurance agents to sell the policies to forensic experts for identifying the loss and whether to accept the payout and the accountants for dealing with the funds.

Recession doesn’t stop education. The world always adapts to make sure the people who’re learning or studying manage to do so. COVID-19 crisis has made people switch to online classes for studying. The 2008 crisis had a significant impact on the education industry.

When people have alternate options, they are bound to explore them to continue their education. So, people with tech literacy will be needed at various stages during the crisis as it transitions in a smoother economy. Teachers, professors, subject-matter experts, or just tutors will see a surge in demand because an increase in time means an increase in the desire to learn new things.

There is hardly any business today that doesn’t rely on technology. It contributes a significant chunk to the global economy. Even though many businesses may resort to cost-cutting to continue their business, they need to operate to generate some form of revenue.

This revenue comes from maintaining their databases. So, even in times of crisis, the need for data architects, analysts, system maintenance experts, and all other forms of IT professionals will increase. The demand for non-support staff might decrease slightly, but when the products of a company rely on software, we can be assured that the demand won’t dip very low.

Recession will always have a negative impact on the economy. But every time an economic downturn happened, we learned something from that. Governments identified and plugged structural weaknesses. We can’t assure there won’t be structural weaknesses that will cause the next recession.(1)

Experts are always on the lookout for events that could lead to a recession. But we must be able to differentiate between doomsday prophecy spewers and genuine analysts. Whatever the scenario, we know that the employment market will not suffer greatly.