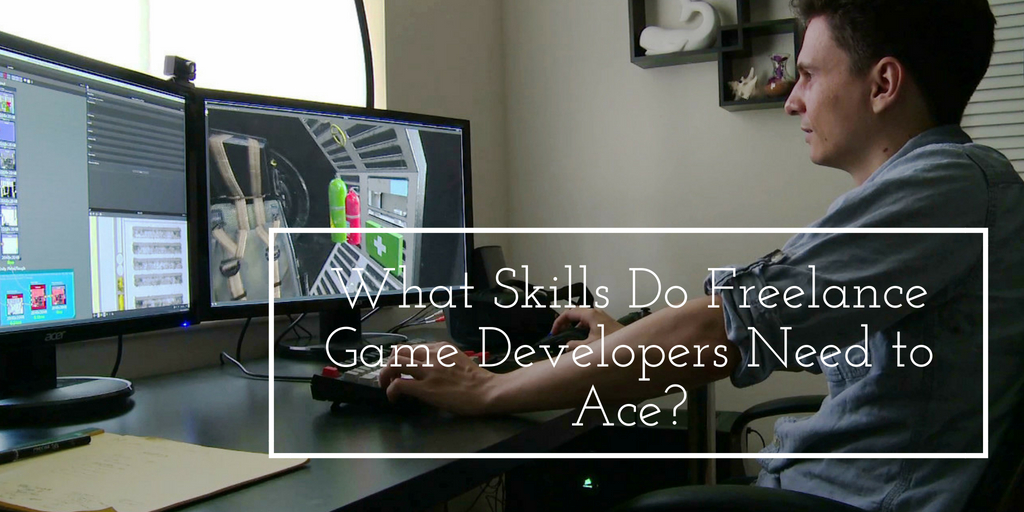 If you think designing a game and being ‘into’ it is the only criterion required to become a freelance game developer, then you are absolutely wrong. To turn ideas and visions into reality it needs specific skills and training.

While it is very important for freelance game developers to be well versed with the technicalities of games, mechanics, tools and so on, it definitely is not the only group of skills they ought to have.

So, if your passion is to become a game developer and if you are planning to go freelance, read this blog to know what skills do freelance game developers need to ace in the business.

Before we plunge deep into the skill sets, let us make you understand what a freelance game developer designs?

A freelance game developer should have strong background in programming, video graphics and hardware knowledge.

Your main job work would involve creating fine video games. Video games are ideally sophisticated software that follows a routine and accepts commands and data from the game controller.  To bring the software to life, it must be written in basic computer language and so, knowledge in computer programming and coding languages is must in your profession.

You have to have certain talent in computer animation and graphic designing too, as they both play a commendable role in video games designing. If the ‘Software’ works as the brain of a video game, the ‘Graphics & Animation’ quotient is its body.

The main difference between animation and graphic is that the former refers to those items present in the game that have life in it or that are in motion, such as characters, backgrounds, cars etc., while the latter refers to what player sees on the screen. You will be judged based on your creative and realistic application of graphics and animation in a video game.

Apart from being a graphic and animation expert, a freelance video game developer should also have vast idea about the mechanisms of various game consoles like Microsoft Xbox, Nintendo Wii, PlayStation etc.

Each game console brand has its own operating characteristics. As a video game developer, you have to be aware of these individual characteristics to ensure software compatibility with consoles.

Having said this, it is quite clear that you should also be familiar with operating systems of computer and mobile, chip designs and other elements that control a game console operation.

If you already have an educational or professional background in software engineering and computer programing, launching yourself as a freelance video game developer would not be a problem. However, if you are a newbie into this entire realm and have limited knowledge about it then you can do the following:

Today, there are limitless places, both online and offline, where you can learn to be a video game designer.

However, make sure you choose an accredited training program for knowledge enhancement and for understanding the technicalities in depth. Such training programs would open ways to several other freelance opportunities apart from video game development. It will also give your prospective clients an idea about your seriousness in the chosen field.

Now that you know what technical expertise is imperative for a video game designer, other skills that are paramount for success in the profession are listed below.

Apart from designing games, you should also master at:

You should be able to dissect a game like a surgeon and go with your gut instinct to understand what makes a game fun to play and enthralling to watch.

World’s best games can hook a 35 year old adult, the same way it can hook a 12 year old boy. It is not always about the animation and graphics; but it is also about the context, purpose and USP. You should possess a sound judgement skill to understand the ethos behind a game that makes it popular across a wide demographic.

Innovation is the key to create magic. Thinking out of the box, thinking the unexpected and yet delivering to users what they actually look for should be your ultimate objective.

Remember the snake game we all played on our Nokia phones? Or the Ninja fruit cutter? They are all simple games with limited graphics but still kept us glued to screen for hours.

You should know to add flavour to the game. Like we say, video games are not always about the animation or high end graphics ; but it is mainly about what you give your users to look forward to.

For instance, remember the game ‘Temple Run’? Our only target was to make the animated man jump and run, slide and turn at a particular speed. We actually looked forward to accomplishing the task and win. Here the ‘Flavour’ of the game was running. But how to make your player run is your USP as a developer.

Careerlancer suggests that if you want to know what the exact reaction your game is receiving, don’t launch a fully-loaded version. Instead, launch a test drive to see if they are fun for a targeted audience.

In order to understand what exactly your target audience or end user expects out of a video game, meet with them or talk to them at a personal level, not just with one or two but with several others. For this you would be needing people skills and communication skills to understand and comprehend their words.

4. Study other Things and Not just Games alone

If you want to give your audiences unparalleled video gaming experience, you need to deal with emotional as well as cognitive aspects of human beings. To achieve this you have to dig deeper to create experiences and know stuffs beyond computer engineering, such as psychology, history, science and mathematics.