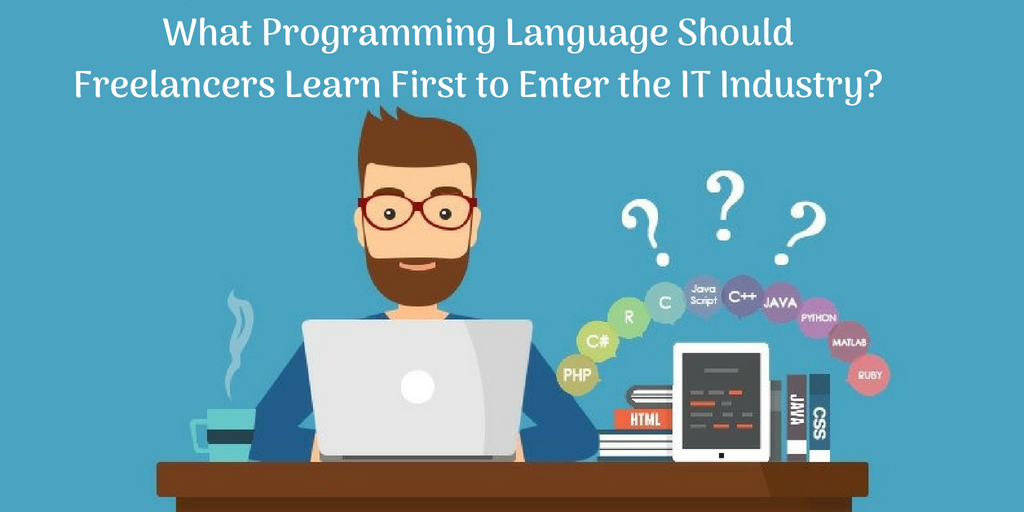 Whether you are planning to start your freelance career in the IT Industry or looking to refresh your programming skills, it’s always good to check what languages are trending in the market. Software development is a tremendous and forever growing field.

For your benefit, we have put down a list together (by TIOBE) of the programming languages freelancers should learn first to enter the IT industry.

”TIOBE is a programming community index provider that updates the most popular and highest demanding programming languages. The index is updated every month and the information is sourced from engineers, vendors and educational courseware.

Java is the biggest yet most un-daunting programming language of the century. You can develop and build applications virtually on any machine or browser. If you are a new entrant, then you should know the importance that Java holds in a programmer’s life and so, you have to acquire Java skills first thing.

P.S: Java and JavaScripts are two separate programming languages that use different plug-ins. The latter is less popular.

Python is one of the most favourite programming languages amongst some developers. And unlike the other languages in the queue, its popularity is still soaring in the industry. Python has an updated system that allows programmers to express their requirements in less than a few lines of code, as opposed to Java or C++.

Also, Python encourages readability of codes too. It has a simple and steadily ascending learning curve and moreover, it could be the ideal programming language for a new freelance programmer.

According to TIOBE, C is the second most in-demand language, after Java. C, like Java is in the industry for a very long time (approximately 48 years) and its value is still not diminished even after so many new arrivals.

Launched in the year 1970, C was originally developed for UNIX.  If you want to develop firmware and portable apps, then you have to learn C.

C++ is an advanced version of C and is quite staple programming language among programmers. However, it’s not as popular as its predecessor.

C++ is advanced because unlike C, it’s a hybrid language which actually integrates two different types of programming languages. Although it has a lot of functionality similar to C, they are not compatible to each other completely.

Surprisingly PHP is declining somewhat now, but it is one of the primary languages used for website designing projects. You will find a PHP team in almost all IT companies today.

WordPress, which is one of the leading CMS platforms, which is used by many freelance bloggers, photographers, cooks and businesses, requires PHP for performance optimisation.

Dot Net is gradually but steadily increasing in its popularity; as per to TIOBE many IT companies are focusing on delivering .NET projects, more than JAVA or PHP.  Don’t hesitate to learn this language, as the expertise will only enhance your career opportunities.

Although Ruby was very popular some time ago, it has come down in ranking. However, there are many programmers who are still loyal to it. Ruby is extremely loved because it is simple, elegant, and readable and used for general purpose interface development.

Ruby codes are easy to read and so, they are very easy to learn. So, learning Ruby will only add another value point to your bucket list, although most don’t believe it deserves to be among the top 10 programing languages.

If your sole purpose is to create interfaces that run within a browser then you should opt for JavaScript. Although it is not as popular as Java or C, it has its own fandom. It’s pretty stable and is one of the languages that almost all techies know and have learnt.

The good news for freelancers is that learning the language will not bore a whole in your pocket, it is economical.

Just like JavaScript, Perl is also a script programming language, quite similar to C in Syntax. Truth be told Perl is not one language, but a family of languages with little differences between each of them.

Perl, in theory is very easy to learn but to use and deploy different Perl languages you need to have prior experience working with it. The latest in the family, Perl 5 is powerful, quite flexible, and customisable, so much so that it is referred to as “the Swiss Army Chainsaw of Scripting Languages”.

Assembly language is not a high-level language but it can do a lot of things which even the other languages mentioned in the list cannot.  If you want speed and reliability in your programming, choose this language.

Because it is used when speed is essential as well as when higher level languages are not productive, we have seen a sudden surge in popularity among freelance programmers. The only drawback with assembly language is that it works only in specific types of CPUs.